Anyone Deliver A Concept Album For All "Humanity" 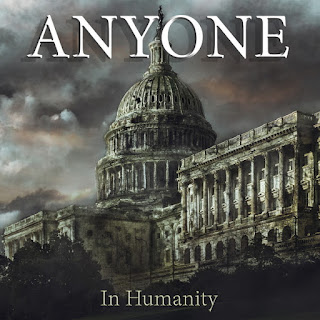 The progressive rock band, Anyone is preparing for its latest studio effort titled "In Humanity," which will be released on October 12th. The band was originally formed over two decades ago when multi-instrumentalist Riz Story teamed up with Jon Davison of Yes and Taylor Hawkins of the Foo Fighters, along with guitarist Sean Murphy, to record some music together. When it became time to record their debut album for Roadrunner Records, Hawkins left Anyone to join Alanis Morissette's band and the original line-up fell apart. Riz was determined to make it work and Anyone released their first album in 2001. Now twenty years later, Riz Story has created the fourth studio album for Anyone by performing, producing, mixing and mastering the new album himself.

It begins with the nine-minute opener "Elations," as the flow of the song keeps you glued to the speakers to see which direction the music is headed. The epic feel of "Apocalypse" showcases the layers of instrumentation that Riz recorded and melded together in order to deliver an iconic piece of music. His musical skills are on full display during the intense, energetic rockers "Emergence" and "Don't Swallow Tomorrow," before finally slowing down for the gentle, atmospheric ballad "Whole World's On Fire." Anyone wraps up their new album with the experimental, fifteen-minute soundscape of the title-track "In Humanity" and the ambient relaxation of "Curtain Call." To find out more about Anyone and their latest release "In Humanity," please visit anyoneden.net.