Nektar "Sounds Like Swiss" On New Release Of Vintage 1973 Concert 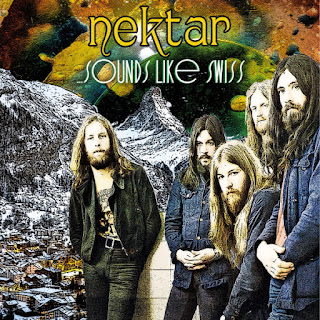 Recently discovered were rare audio and video recordings of the legendary progressive rock band, Nektar performing in Switzerland during their 1973 promotion of their album "...Sounds Like This." This new two-CD/DVD set titled "...Sounds Like Swiss," features Nektar's performance on the Swiss TV show "Kaleidospop," as well as a complete soundboard audio recording of their performance at Pavilion des Sports in May 1973. The set also features new liner notes from bassist and founding members Derek "Mo" Moore and Mick Brockett. The line-up for these shows feature all of Nektar's original members, as they give a reminder why they are considering one of the premier bands of progressive rock.

The band start off the show with the full 22-minute opus of "Journey To The Centre Of The Eye," which is worth the price of this new release all on its own. Hearing the band perform this epic piece live, during their prime is a treasure to behold and listen to over and over again. The show continues with the different tempos changes of "Desolation Valley/Waves," while "A Day In The Life Of A Preacher" is an all out rock assault. Nektar also introduce music from their forth-coming 1973 album "Remember The Future," with the blues jam "Let It Grow." The second half of this release showcases the band's ultimate live performance of some of their newest songs like "Odyssee," "Good Day" and "1, 2, 3, 4," before finishing with the eleven-minute psychedelic medley of "Crying In The Dark/King Of Twilight." To find out more about this new live release from Nektar, please visit nektarsmusic.com.